Caligula is clearly a case of imperial madness and hardly suitable for serious reflection upon today’s problems. I care to differ.

It is a set phrase to say that every historian reflects his own interests as well as those of the Zeitgeist. Pondering the ruler of his day, the German medievalist Ludwig Quidde used the image of Caligula to criticise the German emperor Wilhelm II (1859-1941). Quidde thus introduced a new method with which to analyse contemporary concerns as reflections of ancient history. In a short pamphlet, published in 1894, Caligula – Eine Studie über römischen Cäsarenwahnsinn [Caligula: A Study of Roman Imperial Madness], he used the term “imperial madness” to interpret imperial behaviour. This imperial insanity is characterised by megalomania, risen to self-idolisation, while scorning every legal limitation. The atrocity is pointless, useless, and cruel.

This madness comes about when the elite degenerates to the extent of allowing the ruler to transgress all boundaries of the legal order.

Quidde’s contemporaries easily saw through the intended masquerade. The historian, using the notoriously mad but very distant emperor Caligula, had aimed his arrows at none other than the not-so-mad and not-so-distant German emperor Wilhelm II.

Defining Caligula’s behaviour as “imperial madness” while referring to Wilhelm II, Quidde fused antiquity with his own day. The specific determination of the term “imperial madness” drew special attention to Quidde’s criticism, resulting in the booklet becoming a bestseller. While the pamphlet made its way into Britain and France, its learned author found himself pondering the sudden end of his academic career serving a three months’ term in a German prison.

Thanks to Quidde, Caligula became a referential figure for contemporary dictatorial powerplay and crazed abuse of power. The commotion this caused led others to take a closer look at the Roman emperor known mainly by his nickname “Bootikins”. It was the beginning of modern Caligula-studies.

Despite this serious scholarship, the collection of persons dubbed a “Caligula” still grows. It goes from “the female Caligula”, Ranavalona I, sovereign of the Kingdom of Madagascar from 1828 to 1861, to “the Caligula of biology”, the co-discoverer of the molecular structure of the double helix, James Watson.

And, of course, today’s usual suspects: 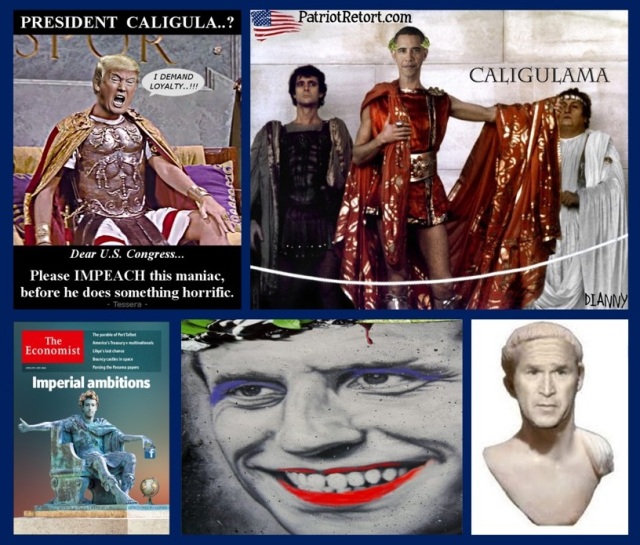 Typifying someone as a “Caligula” makes perfectly clear how that person should be seen, according to the accuser. Such a characterization, however, can and should be considered as a form of character assassination. This kind of attack violates both the accused as well as serious history, because it is based on false intentions. The extreme, and unanimous, vilification of Caligula was the result of deliberate blackening by Roman elite authors quick to cry wolf when someone or something approached the demarcation line of their liberty, their respect, their dignity, their honour or their wealth. Caligula rigidly challenged all of these.

By defying the Roman elite, Caligula had chosen the wrong role. As a result, the elite authors of Roman history depicted Caligula as a ruthless and entirely perverted monster, thereby ostracising him for posterity and pushing him beyond the realm of humanity. Two contemporary authors, Seneca and Philo, pictured him as mentally deranged, a portrait further blackened by Flavius Josephus, Suetonius and Cassius Dio.

After his actual assassination, young Caligula was assassinated for the second time. This portrayal lasted until the beginning of the twentieth century, when scholars attempted a revision of his reign and character. The traditional image, however, is still very much alive in modern scholarship, as it is in popular culture.

One thought on “As Crazy As Caligula? [Part 2]”